Her three children, who range in age from 4 to 8 years old, could get their faces painted and have balloon creations made for them while Pagan could get important information about health care, nutrition and other topics. Despite the wind and overcast sky looming above the outdoor fair, Pagan and her children were having a great time. "It's a good event," she said. "It helps you learn a lot of things about health, and the kids love it." 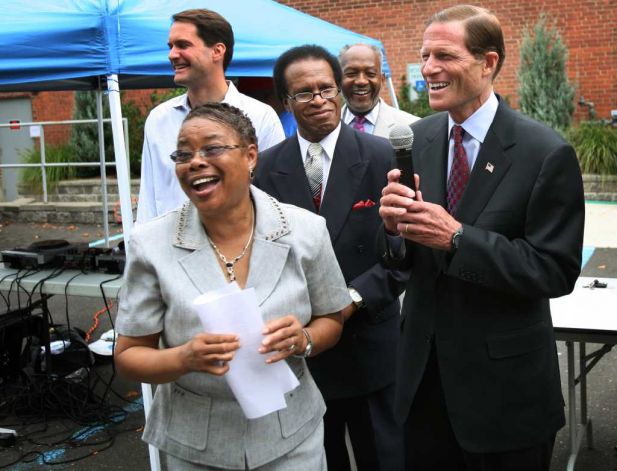 Pagan was one of more than 250 people at the fair, which, besides the activities for kids, included medical screenings and a slew of information on nutrition and other health issues. The fair was held in honor of National Health Center Week, which recognizes facilities like Southwest that provide health services to the poor, uninsured and others who otherwise might not have access to high-quality care.

Bridgeport has the highest number of uninsured of any community in Connecticut, about 92,000, according to 2008 Census Bureau data, the most recent available. All told, Connecticut has about 311,000 uninsured. The statewide figure for the percentage of the overall population without health insurance is 10.2 percent, well below the national average of 17.1 percent.

Thursday's fair was one of many activities held throughout the state to recognize National Health Center Week. Community health centers have been center stage lately, along with many other facets of the health care system, thanks to the sweeping federal health care reform legislation passed earlier this year. Among its many aspects, the reform package will provide funds to build new community health centers and expand existing ones.

Southwest is one of 14 community health centers in the state. The Fairfield Avenue location, which opened in 2007, is the center's nearest site. Southwest has four other health facilities in greater Bridgeport. There have been more than 800,000 patient visits to Southwest facilities since the health center was founded 34 years ago.

Pagan has been coming to Southwest for two years for dental, internal medicine and other health services. She is unemployed and uninsured, though she does have insurance for her children through the state and expects to be insured through the state herself in the near future. Pagan said the center allows her to get services, like dental care, that she might not otherwise be able to afford. "The doctors are really great," she said.

Evelyn A. Barnum, Chief Executive Officer of the Community Health Center Association of Connecticut, said centers like Southwest play a crucial role in making sure everyone who needs medical services receives them. Though low-income populations tend to have a high incidence of chronic conditions, these people often can't afford regular preventive care, Barnum said. In some cases, they turn to what they see as their only option -- the emergency room.

A recent report from the Connecticut Department of Public Health's Office of Health Care Access showed emergency department utilization is growing at an annual average rate of 3 percent, and that a large number of those using emergency services could have been sufficiently served by a primary care physician. One of the possible reasons cited for this phenomenon was a lack of access to health insurance coverage.

Centers like Southwest are "taking care of people who can go nowhere else," Barnum said. "Community health centers help keep people out of emergency rooms."

Others at the fair included Teresa Rodriguez, of Bridgeport, there with her three young children. Rodriguez is covered by Medicare, but regularly goes to Southwest, because "I really like my doctor." Rodriguez explained that she has arthritis in her leg that one of Southwest's doctors helped her identify and treat.

"They're very good here," she said.